Culture as Salvation in Binti 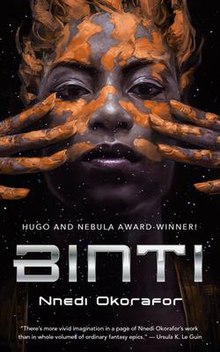 “So me being the only one on the ship was not that surprising. However, just because something isn’t surprising doesn’t mean it’s easy to deal with.” – Binti

In Nnedi Okorafor‘s futuristic novella, Binti (2015), the sixteen-year-old, remarkably intelligent, eponymous protagonist experiences many firsts including leaving home to attend college, traveling through space, and meeting alien life forms. She is both excited and uneasy about her future and the opportunities that await her, but she is also aware that her “otherness” as a member of the Himba ethnic group might cause some to marginalize her and treat her unkindly. Yet, despite this mistreatment, Binti remains true to herself and her culture, and is saved because of it.

Even though Binti is a human traveling with many other humans from Earth to the distant planet of Oomza Uni to study at its university, and although her fellow travelers are aware of, and possibly familiar with, various life forms, Binti’s appearance and culture particularly unsettle them. As a Himba female, she regularly covers her body and hair with a reddish clay substance called utjize, which is normally used to cleanse herself and protect her skin from the sun. Binti suspects that her appearance might alarm or even repulse others just as her people are commonly disparaged on Earth, and before long, her suspicions are confirmed. Human woman from other people groups openly display their disgust for Binti; they stare at her, pull her hair, even state aloud, “These ‘dirt bathers’ are filthy people” (16). These actions bother Binti, but she continues her cultural practice despite its apparent needlessness on the space ship, and she plans to continue doing so once she arrives at Oomza Uni.

Binti understands the difficulty of existing on the margins of society, especially being a teenaged girl from an isolated patriarchal culture and despite the advancements offered by an intergalactic, multispecies universe. Still, Binti clings to her culture even though many others in her position might jump at the chance to distance themselves from such an unappreciated identity and a people group who many other earthlings discriminate against and even view as slavish.

Ultimately, Binti refuses to assimilate or allow society to restrict her in any way, and this determination and steadfastness saves her own life and those of countless others. She is a beacon of hope and a paragon of strength for black girls and society today.

New Collection – Black From the Future